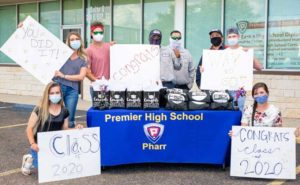 “This was a great time for the community to come together for students who have put in years of hard work,” Josh Castelan, manager of Fox Pest Control, said in a news release. “We would also like to spread awareness of the school, which relies on community support and enrollment.”

Headquartered in Logan Utah, Fox Pest Control’s McAllen, Texas, office is adjacent to the school. Technicians lined their trucks around the area, ushered, and gave out gift bags with gift cards, while the door-to-door sale representatives showed support for the 40 graduates.

The school focuses on providing an academic program for students who thrive in smaller classrooms and relaxed settings. This allows students to graduate early or take classes while working or caring for children without paying for tuition.

Fox Pest Control has a reputation for giving back. In October, for example, the company instituted a company-wide Pick Up Trash project. More than 150 Fox Pest Control employees across 13 branches, spent a morning collecting trash and refuse in their local communities — from Shelton, Conn., to McAllen, Texas. Team members collected more than 120 bags of trash. Some also painted fences and trimmed overgrowth.

A month later, the company participated in a local Make-A-Wish program. It granted the wishes of two Utah-area girls with debilitating illnesses — Lennon, 5, and Eliza, 4 — to go to Disney World and meet the princesses. The year before, Fox Pest Control sponsored a boy who wanted to be a DJ and supplied him with DJ equipment. The company says it plans to continue granting wishes each year.

And in April, Fox Pest Control’s 18 branches nationwide worked with customers all month long to collect non-perishable food items for those in need.