Editor’s Note: Pest Management Professional has learned that McCall Service’s J. Bryan Cooksey Jr. died Oct. 27 at age 88. We send our sympathies to his family, friends and colleagues. What follows is the obituary we were sent: 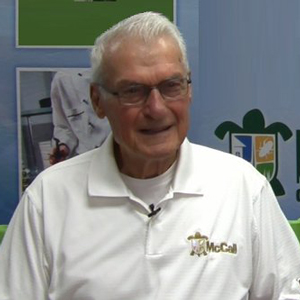 J. Bryan Cooksey Jr. was inspiring in his roles as husband, father, business owner and a civic leader. Bryan was born in a farmhouse Oct. 15, 1932, in Lamont, Fla. From humble beginnings, with no electricity and no indoor plumbing, he watched his parents work extremely hard to provide for their family. He inherited their work ethic, and their love of God, family, patriotism and public service. He graduated from Jefferson County High School in 1949 at the age of 16. From there, he went to the University of Florida — and promptly flunked out.

He immediately enlisted in the U.S. Army to serve our nation from 1953 to 1955. Here he liked to tell us his claim to fame was to be such a good private that he was promoted to corporal three times; he just had a hard time keeping that rank.

After his stint in the Army, a more mature Bryan returned to the University of Florida, this time successfully. He earned a bachelor of agriculture degree in 1956 and a master of agriculture in 1958 (entomology and agronomy). And he was an avid Gator fan ever since.

His wife, Jane, tells a story of when they were first married. The electric bill and the Gator Football ticket bill arrived on the same day. They could only afford to pay one or the other, so they went without electricity for a month.

Bryan quickly rose through Terminix’s ranks and became a training director and troubleshooter based in Memphis, Tenn. He loved that job and excelled at it; however, the travel took him away from his young and growing family, so he left Terminix and returned to Jacksonville.

He joined McCall Service, which only sold heating oil at the time, to start their pest control division. He quickly grew the pest control operation and was promoted to president of the entire company. In the late 1980s, he was able to buy the business outright, and it prospered. Bryan’s sons bought the business from him, and continue to own and operate it today as they expand it through Florida, Georgia and South Carolina.

Bryan always believed in giving back, both to the community and the industries in which he served. He practiced that belief throughout his life. He was a past president of the following: Rotary Club of Jacksonville, Greater Jacksonville Agricultural Fair, Duval County 4H Foundation, Florida Pest Management Association, Oil Fuel Institute of Florida, Florida Petroleum Marketers Association and Pi Chi Omega.  He was a director of the National Pest Management Association, District Chairman North Florida Council of Boy Scouts of America, Senior Warden for the Episcopal Church of our Savior and a Gator booster.

Bryan was a fifth-generation Floridian. He leaves behind his wife of 62 years, Jane Williams Cooksey, and children Beverly Mulholland (Sean), Bryan Cooksey III (Teresa), Catherine Patton (Patrick), David Cooksey (Nicole) and John Cooksey (Leyda). Together, Bryan and Jane also cared for several foster children until they could be reunited with their families. He has 16 grandchildren and 10 great grandchildren, all of whom adore him. He was a kind and humble man who had a smile and a helping hand for anyone who needed it. He raised his children to be the same. He was truly grateful for all the blessings in his life.

Bryan loved his family and that love was returned, he will be greatly missed.

In lieu of flowers, please make a donation to the Alzheimer’s Association, the Jacksonville School for Autism, or the J. Bryan Cooksey Memorial Fund for Helping India Together.