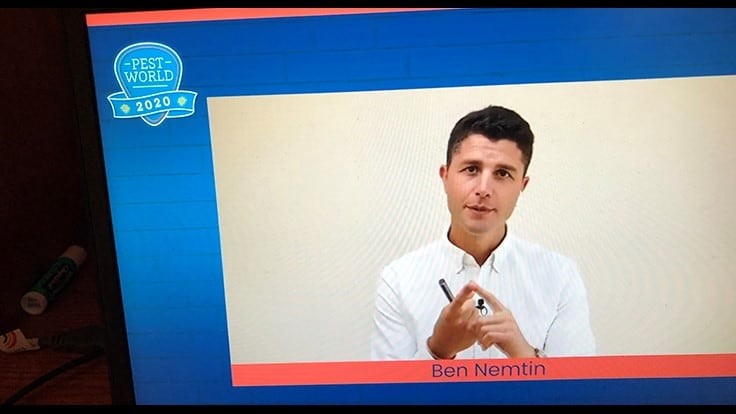 FAIRFAX, Va. – What started as Ben Nemtin’s idea to help him “get out of a funk” has turned into a career and – more importantly – a project that has helped him better not only himself but others. That project is “The Buried Life” –  a chronicled journey of Nemtin and three hometown friends – that became an MTV TV show and philanthropic endeavor that has raised funds for charities and made dreams come true. Nemtin shared his inspirational story to PestWorld attendees in the Thursday general session sponsored by Syngenta.

After a successful high school career as a standout rugby player in Canada, Nemtin seemed to have it all figured out. But the pressures of being a student-athlete combined with his lifelong battle with depression took a toll on Nemtin, who ended up dropping out of college and leaving the Canada National Rugby Team.

Nemtin’s next move turned his life around. He contacted a neighborhood friend, Jonny, whom he knew was a self-taught amateur filmmaker. The pair added two more neighborhood pals and began brainstorming for film ideas. They found inspiration in four lines from the 1852 poem “The Buried Life” by Matthew Arnold:

But often, in the world’s most crowded streets,

But often, in the din of strife,

There rises an unspeakable desire

After the knowledge of our buried life…

The group decided to make a 100-item “bucket list” – 100 things they wanted to do before they died – and, with camera in tow, set out on an RV tour to document this undertaking.

What followed surprised and enlightened them. In soliciting others (via the media) for help in checking off “bucket list” items, the foursome uncovered incredible stories. People recognized that they were receiving attention for their bucket list quest, and they began sharing their wish lists. For example, a local man named Brent emailed them and said his dream was to deliver pizzas to a homeless shelter. “It turned out the reason Brent wanted to deliver pizzas to the homeless shelter was because he actually lived in the homeless shelter. [He said] When people came and brought food from out of the blue it was the best feeling ever. It felt like people cared about us.”

These and other experiences led the foursome to expand their focus from just clicking off items on a bucket list, to making a difference in people’s lives and sharing these stories. For example, the group helped Torri, an Ohio teenager born without a hand, achieve her goal of obtaining a bionic hand, by using their influence to get one donated. They have kept in touch with Torri, who enrolled at Bowling Green State University with the goal of becoming a social worker and working in a homeless shelter, a profession she chose because she wanted to “pay forward” the goodness others showed her. Nemtin calls this “The Ripple Effect.”  He said, “You don’t just help that one person, you help the people around them. You help their friends, you help their family and sometimes you help everyone around them.”