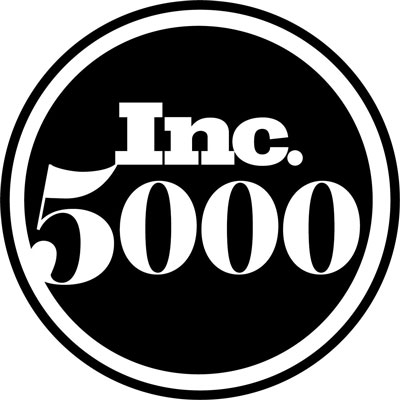 Inc. magazine has published its annual Inc. 5000 list, a prestigious ranking of the nation’s fastest-growing private companies. The list represents a unique look at the most successful companies within the American economy’s most dynamic segment: its independent small businesses. Intuit, Zappos, Under Armour, Microsoft, Patagonia, and many other well-known names gained their first national exposure as honorees on the Inc. 5000. The annual Inc. 5000 event honoring the companies on the list will be held virtually from Oct. 23 to Oct. 27.

Not only have the companies on the 2020 Inc. 5000 been very competitive within their markets, but the list as a whole shows staggering growth compared with prior lists. The 2020 list achieved an incredible three-year average growth of more than 500 percent, and a median rate of 165 percent. The Inc. 5000’s aggregate revenue was $209 billion in 2019, accounting for more than 1 million jobs over the past three years.

For 2020, at least nine companies in the pest management industry made the list. Several have been on it in previous years, as well:

“What an honor to be ranked among the fastest-growing companies in America,” Ben Kennard, president and CEO of Milwaukie, Ore.-based Axiom Eco-Pest Control, said in a news release. “Our expansion was driven by a focus on excellent customer service and eco-friendly pest control. These have been tremendous assets for our company.”

In a news release, Greensboro, N.C.-based Go-Forth noted that over the past six decades, it “has expanded its service offerings to include not only residential and commercial extermination, but also lawn care and Christmas Lights. Go-Forth is also the only company in North Carolina to be home to the NC Statewide Technician of the Year in 2009, 2010, 2012, 2013, 2014, 2015 and 2016.”