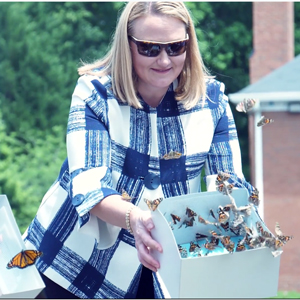 For more than two decades, Atlanta, Ga.-based Arrow Exterminators has sponsored and participating in several events hosted by Children’s Healthcare of Atlanta. In years past, to celebrate Mother’s Day in May, Arrow team members have visited the Egleston and Scottish Rite locations with several hands-on activities for the children to enjoy with their parents and other patients.

Because of quarantine recommendations during the COVID-19 pandemic, however, the Arrow team had to think a little outside the box to honor this tradition. So for 2020, the team created a virtual butterfly release event.

“Each year, we have had the pleasure of creating special gifts and moments with the patients and releasing butterflies into the air to celebrate this holiday. This year will be no different!” Emily Thomas Kendrick, Arrow’s president and CEO, said in a press release. Thomas Kendrick is the daughter of Pest Management Professional Magazine Hall of Famer Joe Thomas (Class of 2009), and granddaughter of Arrow’s founders, Starkey and Jean Thomas.

Arrow Exterminators has put together a video of the butterfly release, which will be broadcasted on all televisions in the hospital this weekend, for the children to celebrate Mother’s Day this year. Along with releasing butterflies, Arrow has provided arts and crafts for the patients to do with their loved ones.

The company, founded in 1964,  Arrow has a modern fleet of more than 2,100 vehicles, 128 service centers, 2,500 team members with revenues exceeding $250 million, and in 2020 was named the #1 Top Workplace in Atlanta by the Atlanta Journal-Constitution.  With QualityPro Certification by the National Pest Management Association, the company has offices in Alabama, Arizona, Florida, Georgia, Kentucky, Louisiana, Mississippi, North Carolina, South Carolina, Tennessee, Texas and Virginia.