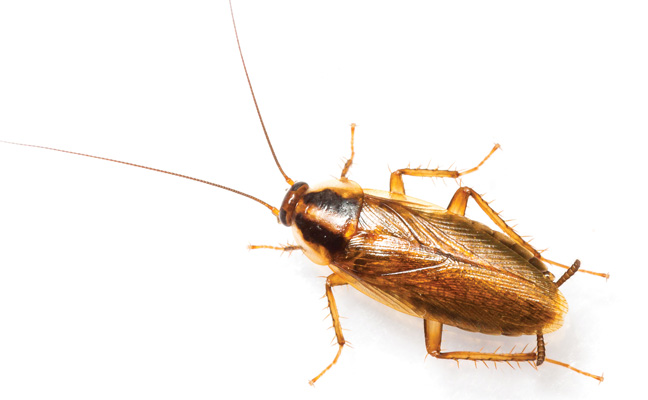 Research is the lifeblood of the professional pest management industry. Without entomologists performing observational studies, experiments and testing that build upon known results of previous studies, we wouldn’t have the equipment, materials and techniques we do today.

This is especially important for the control and suppression of populations of German cockroaches (Blattella germanica). Their sheer numbers and fast reproductive cycles mean a population can build very quickly. They also are among the most adaptable creatures pest management professionals (PMPs) encounter, and staying a step ahead of any resistance issues has long been a big focus.

In 2019, Dr. Michael Scharf and his team at Purdue made headlines with results of their German cockroach resistance study, published in Scientific Reports. But while the media made hay with the old “cockroaches will outlive humans” theory, Dr. Scharf notes there’s actually a lot of nuance in the findings. As of mid-September, in fact, Purdue has three follow-up projects in the works based on this study. 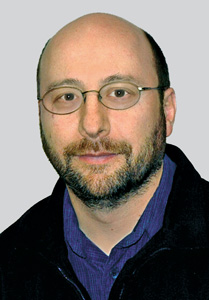 “First, we are trying to look at new cockroach populations from different areas of the country to see if they can build resistance in response to well-defined insecticide selection pressure, as we saw in the first study,” notes Dr. Scharf, who is a professor and the O.W. Rollins/Orkin endowed chair at Purdue. “Unfortunately, COVID-19 creates all kinds of problems for doing field work right now — and for university research in general — so this work is on hold.”

A second related study, also on hold as this article goes to press, involves trying to see whether insecticide resistance and cross-resistance levels are larger and broader in locations where cockroach field populations are larger.

“In other words, do ‘mega-cockroach populations’ exist because of resistance, or are there other, equally manageable factors at cause?” Dr. Scharf explains, noting that current data is limited on the topic.

Dr. Scharf points out that in the 2019 study, some of the findings were dependent on location and other population variables. It was preliminary, he stresses, and the three studies that resulted from the initial findings — as well replicating studies by other researchers, over time —will be more helpful in drawing firmer conclusions about cockroaches and resistance.

“What works in one location may not in another, and vice-versa. For our 2019 paper, for example, there were some repellency issues that drove cockroaches to new, insecticide-free locations and
kept populations from shrinking,” he tells PMP. “This study needs to be replicated in other locations and by other researchers.” 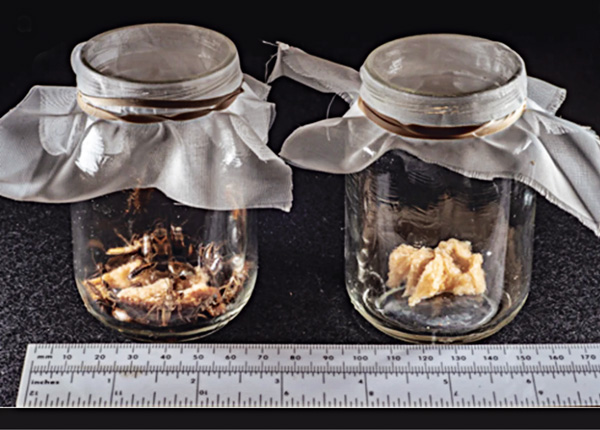 Baby food jars were used to live-trap B. germanica in the field, baited with white bread soaked in beer and greased around the top to prevent escape. PHOTO: JOHN OBERMEYER

RAPID TESTS IN OUR FUTURE?

Last but not least, the third project that sprang from the 2019 study involves “research to develop rapid tests that PMPs can use to diagnose resistance and make fast decisions about which products will have the greatest likelihood of success,” Dr. Scharf says, noting the team hopes to publish its findings within the next two years.

In the 2019 study, the team lab-tested the populations first to ensure they knew what level of resistance to certain active ingredients each population had at the onset. Dr. Scharf says his team is working toward this being something feasible that pest management firms can do in their offices.

For example, he foresees the day where, before embarking on a cockroach cleanout for a restaurant, your technician brings back three or four live specimens and has your staff entomologist run a test to see what the best product(s) are going to be for the account.

“When lab assays revealed low resistance levels for specific insecticides, we were able to deploy those insecticides without rotation, with good results that most likely would satisfy customers,” Dr. Scharf says of the 2019 study. “The problem with that study was, we used a bioassay test that really only can be done in a research lab. Tests that PMPs can perform on live-trapped insects, using formulated products, would be easier to execute and quickly provide information to drive decisions. We are working now to develop tests that will provide turnaround in 12 to 24 hours. Obviously, we want to get it right, which will involve lots of calibration and testing on different populations to maximize predictive potential.”

Until we can find “realistic and efficient ways to monitor resistance,” Dr. Scharf says, “rotation is one of the best options we have.”

While biochemical test kits based on resistance mechanism monitoring have been developed for bed bugs, Dr. Scharf notes “there is no substitute for bioassays on live insects, and bed bugs may have a narrower range of resistance mechanisms since they have likely recently gone through a genetic ‘bottleneck.’”

This “bottleneck” effect, he explains, makes bed bugs more homogeneous across geographic locations. It also helps that for the second half of the 20th century, bed bug populations were extremely low worldwide, only experiencing a resurgence in the late 1990s.

German cockroaches, by contrast, have not gone through such global bottlenecks, but rather “have been migrating around and mixing things up genetically for centuries,” he explains.

The bottom line on resistance? Dr. Scharf underscores the fact that “resistance evolution is a dynamic process, and it evolves differently in different populations.” To get a full, more accurate picture, he adds, researchers must continue to look at the issue from multiple angles.

Dr. Changlu Wang, an extension specialist in urban entomology for Rutgers University, and his team also are building upon findings of their 2019 published study. The focus of that study, published in the Journal of Integrated Pest Management, found that in essence, best practices for both cockroach and bed bug prevention seem to be well-established for integrated pest management (IPM) within individual apartments. But not much has been written about what to do to keep populations spreading within the hallways, and between walls and ceilings, etc., to other apartments. This is an issue, the team said, because cockroach infestations among units in particular often are correlated.

In the 2019 study, the team distributed one-page educational fact sheets so residents understood the importance of cleaning floors, stowing pet food, and not using do-it-yourself (DIY) products. In addition to handing the sheet to each resident as the team conducted the building-wide inspection, property managers kept a stack of flyers for distribution as needed. Dr. Wang says both ways worked well, and recommends to PMPs interested in doing the same to ensure they have enough sheets to cover both ways.

Individual distribution had one benefit over relying on the managers, however. “By handling the flyer by ourselves, we had the opportunity to speak to the residents about good sanitation, decluttering, and reporting pest infestations.”

The team also held two seminars for residents in a community room, Dr. Wang says. “The meetings went well, and residents learned a lot from the presentations. Residents also spoke to one another about their experiences. Most of the residents and the staff were very appreciative of our work.”

The study found that in a multi-unit housing account, proactively bundling bed bug and German cockroach IPM and prevention programs seemed to be more beneficial than reactively treating individual infestations.

“Our efforts helped the housing authority save money and reduce pest-related health risks,” Dr. Wang says. Being proactive, and then able to solve problems right as they happen, means PMPs can charge for their knowledge, expertise and effort. They’re bringing value in the long term, over a company that just comes in with a low price and minimal effort. 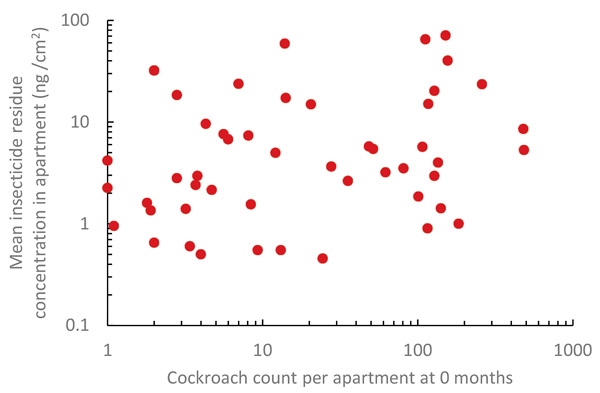 The 2019 study led to two additional studies for Dr. Wang and his team.

As published in Insects magazine, a publication from the Multidisciplinary Digital Publishing Institute, the first additional study reported on the changes in insecticide residue levels in homes after implementation of a proactive IPM strategy.

Floor wipe samples were collected from the bedrooms and kitchen floors of 69 apartments with German cockroach infestations at the start of the study, and again 12 months later from 49 of them. The team measured the levels of 18 insecticide residues. (See Fig. 1 above.)

The second publication, published in The Journal of Allergy and Clinical Immunology: In Practice, reported the effect of IPM on cockroach allergen reduction.

“It showed that after 12 months, the allergens Bla g 1 and Bla g 2 were reduced by 96 percent and 90 percent, respectively,” Dr. Wang says. (Editor’s Note: See “Defining German cockroach allergens,” below.)

“These two publications show that IPM is not only more effective in reducing pest populations, but also has significant benefits in reducing insecticide residues and cockroach allergens,” Dr. Wang concludes.

Blattella germanica can produce and carry at least 11 allergens. The variants range from “Bla g 1” to “Bla g 12” and all take the route of airway exposure. (There is no Bla g 10 currently.) The allergens are proteins in the cockroach’s body parts, saliva and waste, and even dead cockroaches can cause an allergic reaction in humans. In some cases, they can trigger asthma attacks.

For asthmatics, symptoms can include: